Leading off with a Christmas track that feels inspired by “Mysterious Mose”, this Canuck jazzbo knows that when winter comes around, you better heat things up pretty quickly---and that’s what he does.  The tunes are mostly well known, the energy he brings a welcome addition.  If you’re looking to jazz up your Christmas, this is the first stop to make as he’s right in the classic jazzbo pocket and a gasser throughout.  Hot stuff. 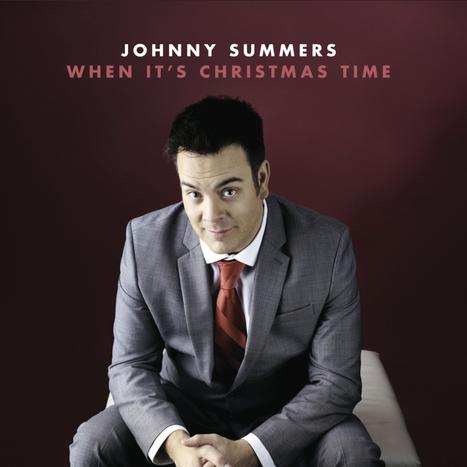 The present surprise this season is Canadian singer/trumpeter Johnny Summers' When It's Christmas Time. Summers is presented in a variety of combo formats ranging from big band swing to small group hard bop. Summers is a durable vocalist able to withstand a range of tonal and volume variations. "'Zat You Santa Claus" is pure WWII big band, while "Rudolph, the Red-Nosed Reindeer" is Chicago bop. "Winter Wonderland" is a duet featuring pianist Chris Andrew and Summer's singing and blowing his horn. This is how Harry Connick, Jr. would do it if dared. "Baby, It's Cold Outside" has Summers sparring with Allison Lynch while playing the flumpet. The band gets its Gospel shoes on for a plaintive "O Holy Night." The style is one that could have been invented by Wynton Marsalis. Summers sings this song perfectly straight to great effect. The singer rounds out his collection with two originals, "Long Way to Go" and "When Its Christmas Time," deserving more attention in the future.

Most musicians know that the Christmas album is the gift that keeps on giving._ Mike Bell

It’s a once-a-year reminder of what royalty cheques look like and an annual opportunity to get back into the heads, hearts and homes of music-lovers.

And while Johnny Summers is well aware that Christmas records sell, he’s also believably adamant that when it came to recording his new jazz vocal release When It’s Christmas Time, “that was never the guiding factor for me”

“I’m doing it for the passion of it,” the local artist says. “And it’s something I’ve wanted to do since I was a kid.”

He acknowledges its importance frequently throughout, even acknowledges that during one of the three recording sessions for the collection of traditional faves and a pair of Summers originals, he and his other family, the Calgary Jazz Orchestra, embraced the December traditions in July, setting up a Christmas tree and sitting down to a Christmas dinner during lunch break.

But mainly the singer and trumpet player acknowledges it was the guiding force and ultimate goal of the album.

“I wanted to create something that would connect with people and stay with them, something they feel that this is what they’re going to pull out every year at Christmas and put it on and it will be part of their tradition,” he says.

Hard to imagine anyone resisting. When It’s Christmas Time is full of seasonal treats and sweetness, the songs and performances as timeless, comforting and comfortable as any annual custom should be, be it trimming the tree or sitting down with George Bailey.

Many of the arrangements were “worked on and honed and tested” over the six years doing the Perfectly Frank Christmas concerts with the CJO, and go down tastily and easily, thanks to the spectacular playing of everyone involved, including guests such as Tommy Banks and Ralf Buschmeyer.

And the songs, themselves, do what the musician was hoping they would do, run a “range of emotions … from the almost sombre and the sacred to the sublime and the fun and almost silly.”

There actually is something for everyone, with kids already gravitating towards songs such as swinging opener Zat You, Santa Claus? and bopping Rudolph, The Red Nosed Reindeer and the adult crowd feeling the thaw and sizzle of numbers such as What Are You Doing New Year’s Eve? and Baby, It’s Cold Outside.

The latter track, actually was something of a happy accident, a song that Summers brought to that aforementioned session as an extra in case they had some extra time to lay it down. When they did, he enlisted the help of his friend, local actress and singer Allison Lynch to add the lady parts, making for a version that transcends the inherent creepiness of the tune.

Unfortunately, Lynch won’t be available for the pair of local Perfectly Frank and CD release shows that Summers and the CJO will be performing this year — on Sunday at the River Park Church — as she’ll be participating in another local seasonal staple, acting in Theatre Calgary’s production of A Christmas Carol, starring as the Spirit of Christmas Past.

But, in keep with the season of giving, Summers has given a pair of amateurs the opportunity to step in, holding an online audition seeking someone to duet with him.

As a result, Analea Wayne, a professional development lawyer, will be performing at the 3 p.m. matinee, and Brianna Jones, a student at William Aberhart High School, will be singing during the 7 p.m. show.

It will, he hopes, make the concerts that much more special — for him, the orchestra and the fans, many of whom have told Summers how much they look forward to it and plan for it every year.

It’s why they’re now expanding it, taking the Perfectly Frank concert on the road to Lethbridge on Thursday, Medicine Hat on Friday and in a modified form to Edmonton on Dec. 23, with the Don Berner Orchestra taking the place of the CJO.

“It’s humbling, it’s really humbling and it’s really heartwarming. And it makes me want to do better, it really does,” he says.

“Very, very early on when I was in university I experienced a bit of arrogance where I was the good trumpet player and I was getting all the work for young guys in the scene. And, boy, I let go of that really quickly. There are so many great players, there’s so much to learn.

“So now when people really are truly interested or love or are moved or something by what you’re doing artistically or creatively or just show business-wise I think it’s just humbling. I’m flattered by it but I’m just humbled by it.” 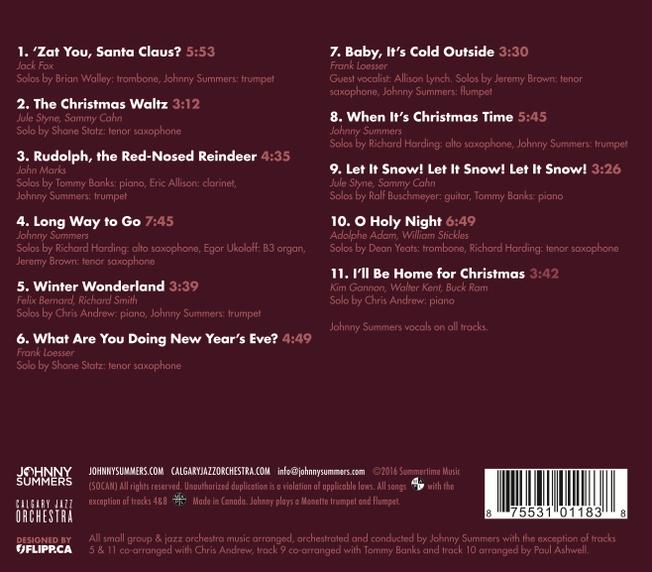 You'll hear a bit of Harry Connick Jr. in this New Orleans flavored track from Johnny Summers, and that's no coincidence.  Listening to Harry as a youngster is what inspired Johnny to become a Jazz musician of the Big Band variety.  Johnny Summers is a Canadian vocalist, trumpet player, composer and arranger.  "When It's Christmas Time" is just one song from Johnny's new album of the same name.  On the record, he shows himself equally at home with any number of styles, including Gospel and Swing.

The Calgary Jazz Orchestra sounds spectacular, and even more inviting when accompanied by strings. The instrumentalists consistently command attention. 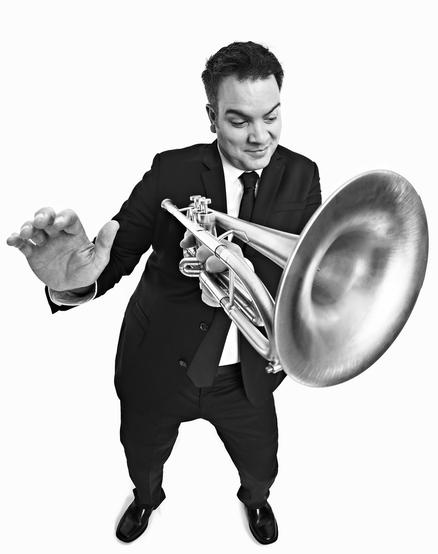